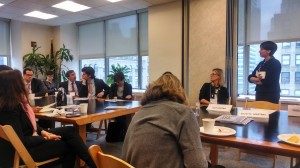 After welcoming remarks by the Fund’s Director, Amy Freitag, Suzette Brooks Masters, the Fund’s Migration program director, interviewed Nisha “talk show” style to kick off a lively discussion.  There was great interest in the possibility of New York City launching a municipal identification card to make New York City a more inclusive and accessible city to individuals with identification challenges, such as immigrants without documentation.

This topic is a familiar one to the Kaplan Fund.  We supported the first municipal ID card in the country in New Haven in 2008 – the “Elm City Resident Card” – which became a flash point for significant anti-immigrant activity at the time. As more municipalities experimented with identification cards, there was an opportunity to learn from the mistakes and implementation challenges of the past.  Before Nisha Agarwal became commissioner, and before Mayoral candidate de Blasio announced his support for an ID card, the Kaplan Fund commissioned Nisha, then at the Center for Popular Democracy, to write an analytical research report examining all the municipal ID cards that had been tried in the United States. (The report can be downloaded here: http://populardemocracy.org/news/who-we-are-municipal-id-cards-local-strategy-promote-belonging-and-shared-community-identity).  It was distributed at the breakfast to all attendees and referenced during the discussion.

When New York City’s IDNYC card launches in early 2015, it will benefit from Nisha’s extensive research and deep expertise on the topic.

In her role as MOIA Commissioner, Nisha has enjoyed the full support of the de Blasio Administration in developing IDNYC.  By all accounts, the launch of IDNYC has been wildly successful, shattering the uptake rates of all other cards that have been launched across the country. It is inclusive and appealing to all New Yorkers, not just those individuals facing identification challenges. For more information, please visit http://www1.nyc.gov/site/idnyc/index.page.

All in all, this event was a great launch to our speaker series and the perfect vehicle to kick off our social media activity! 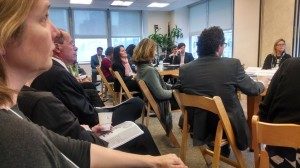