Portland, OR: The Most Livable City in the U.S. 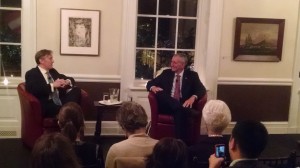 So said a recent Washington Post profile of Portland, Oregon, where City Hall’s leafy chard stalks—sprouting on an urban farm where a parking lot once stood—are emblematic of the city’s status as a pioneer in sustainable urbanism.

And yet while Portland’s lessons in density, livability, and hop-forward craft ales have spread far and wide—none other than Salt Lake City now boasts the most light-rail miles built in recent years—Portland’s surge in diversity and economic dynamism are extending its cachet as an innovator in solutions to complex civic challenges.

At the invitation of The J.M. Kaplan Fund, Mayor Charlie Hales sat down to share insights from the Rose City with David Bragdon, now the Executive Director of research and advocacy group Transit Center, who served for twelve years on Portland’s Metro Council before returning to his native New York to lead Mayor Bloomberg’s Office of Long-Term Planning and Sustainability. What follows are highlights from a wide-ranging conversation.

The Place Where Young People Go to Retire?

Like scores of twentysomethings today, it was quality of life that prompted Charlie Hales to point his Plymouth Valiant toward Portland in 1979, and kept the native Virginian there through his first election as city commissioner in 1993 and on to his run for mayor in 2013. “I didn’t move to Portland because I had a job,” he said. “I wanted to live in a certain way. That value is totally rooted in the college-age young people of today.”

Indeed, City Observatory reports that Portland’s share of young college grads has jumped 37 percent over the past decade, outpacing New York (25 percent) and Washington, DC (36 percent) as a magnet for young, educated people. While debate continues about the pace of job creation and whether the city may remain, in the words of an oft-quoted tagline, “the place where young people go to retire,” it’s clear that Portland has a knack for smart solutions to preserve its slacker sensibility.

One of the largest leaps of faith has been the area’s urban growth boundary, approved in the 1970s amid former governor Tom McCall’s dire warnings of “coastal condomania, sagebrush subdivisions, and the ravenous rampage of suburbia.” Cordoning off surrounding farmland from development has enabled farm-to-table cuisine and local winemaking from crops planted just 30 minutes away. But those bucolic surroundings are also driving up real-estate prices and threatening Portland’s promise of opportunity. “We look at San Francisco, and see the middle class is an endangered species,” Hales said. Housing subsidies, inclusionary zoning, and other tools are being deployed to help maintain the city’s trademark affordability.

How Cities Innovate Is More Relevant than Ever

With Washington in ideological gridlock, innovation has largely fallen to municipalities with an appetite for untested solutions. Portland’s spirit of can-do creativity grows from a communitarian tradition including the advent of Metro, the only directly elected metropolitan planning organization in the United States. Bold decisions have been made easier by a system of distributed leadership, where the mayor assigns oversight of city agencies to elected commissioners, who then provide political cover for agency managers to take risks. Moreover, nonpartisan, citywide elections are held every four years. “You can do something controversial and live to tell about it,” said Hales. “That helps support political courage.”

So does a culture of citizen activism. When Hales went out on a limb and vowed that Portland would be the most European city in America when it came to transportation, bicycle advocates backed him up. Citing the city’s strong network of nonprofit and community groups, Hales quoted de Tocqueville on Americans’ fondness for creating associations, and thereby cultivating democratic “habits of the heart.” As Tocqueville concluded, “it is by the enjoyment of a dangerous freedom that the Americans learn the art of rendering the dangers of freedom less formidable.”

Kudos to the Counterculture Engineers

Citizen-led innovations have been a point of pride since transportation manager Vic Rhodes—known as the “counterculture engineer”—embraced community ideas like painting intersections in colors as traffic-calming measures. (They could burn off the paint if the idea bombed.) Today, citizen engagement includes hard-fought efforts to galvanize community support for day-to-day maintenance and operating expenses. The mayor is currently in the midst of a political battle to impose new local taxes that would pay for street improvements, and the city is backing a similar bond measure for “plain vanilla” parks maintenance, which looks likely to be approved by voters.

Even more difficult challenges have included a two-year-long effort to transform the paramilitary culture of Portland’s police bureau, which has led to victories in training officers to adroitly de-escalate violent encounters and address the city’s persistent homeless population through stronger outreach and a “civility” campaign.

Perhaps the greatest challenge for sustaining a vibrant civic culture has been the city’s notable rise in diversity. With fast-growing populations of Somalis, Eastern Europeans, West Africans, Bhutanese, and Chinese, some 55 languages are now spoken in Portland’s local schools. Consequently, the city has launched initiatives such as the Diversity and Civic Leadership Program to groom new immigrants for civic participation. “We can be a model for how to change the demography of a city and have everybody win,” said Hales. “You have to plan for it and execute a plan, rather than hoping everything will trickle down to these newcomers.”

Portland has not been known for an abundance of jobs for highly skilled workers, but that is changing. Hales cites the flourishing South Waterfront district, where the Oregon Health & Science University (OHSU) opened a dense mixed-use district after running out of land on its original campus atop nearby Marquam Hill. The city persuaded the school to redevelop a former brownfield site on the Willamette River, with the two campuses linked by an aerial tram that has become an instant icon for the city.

Meanwhile, the after an OHSU cancer researcher developed a potent new leukemia drug, Nike Chairman Phil Knight and his wife Penny put up $100 million to launch the Knight Cancer Institute at OHSU in 2008, then pledged an additional $500 million if the university matches that grant in two years. The result? Portland may become a mecca not just for ambitious bike messengers and baristas, but for doctors at one of the world’s leading cancer-research destinations. “Planning is great,” Hales said, “but you’ve got to be open to dumb luck.”

As density and urbanity increase in the city’s moderate-scale landscape, some are calling for a sharper focus on historic preservation in areas like the Pearl District, the former downtown industrial district that planners had envisioned as a job-generating hub, before local property owners suggested high-end residential development and advocated for boosting the FAR to accommodate Vancouver-esque towers. The Pearl has now become a mixed-use zone of medium-density condominium and commercial buildings, but worries remain about the relative lack of protections for pedestrian-scaled historic fabric. “I don’t think our rules are tough enough on preservation and design,” Hales said. “There is a very healthy debate going on about that.”

While challenges remain—including the downward spiral of the Oregonian, the state’s former daily newspaper that’s now delivered four days a week—Hales has continued a tradition of bold thinking and innovation at the local level through proactive pilot projects that often take on a life of their own, in spite of intransigence by state and national leaders. As a case in point, the city launched a streetcar network funded entirely by local means, and only then approached state and federal sources to pitch in. “If we waited for Salem or Washington to build a streetcar,” Hales sighed, “it would still be a rendering.”